I like to use CodeRunner to test out quick snippets of code. I have added Swift as a supported language. I did this by adapting the Objective-C compile.sh script that is used by CodeRunner to compile Objective-C with clang. Hopefully the next release of CodeRunner will support Swift out of the box with a better compiler script and syntax highlighting.

In the CodeRunner Preferences add a new language, check the Language uses compilation script checkbox and edit the script to contain the following:

The Run Command needs to be set to ./$compiler.

I set my Code Template to the following to include all the Cocoa goodness and set the file extension to swift:

Finally, you’ll probably want to change New Language to Swift by right-clicking in the Language list.

Here is a screenshot of the settings: 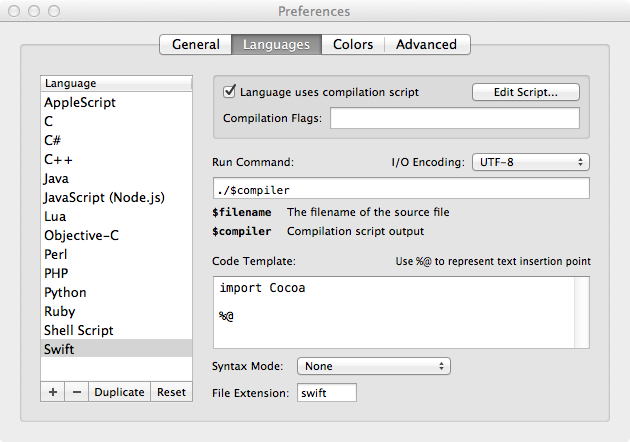 In order to allow the xcrun command in the compilation script to find swift you need to ensure that xcode-select is pointing at a version of Xcode that includes the swift compiler, e.g.